Eat the SNIT out of our 1kh parmy!

What possibly could be better than the Aussie pub favourite; Chicken Parmy? Without a doubt that would be the Newtown Hotel’s MONSTER 1kg parmy. This sizable parmigiana is 1kg of house-made, golden crumbed, chicken breast schnitzel, topped with ham, napoli sauce, and melted mozzarella cheese, served with the classic combo of a garden salad and chips. 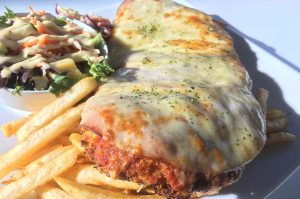 Even though it’s hard to believe that this pub classic isn’t an Aussie creation, the Chicken Parmigiana has its origins in the United States, where it was popularized among Italian-American communities. Italian immigrants created the meal, which quickly became conceived as an authentically Italian dish. Of course, it does take its inspiration from Italy.

Chicken parmigiana is typically served in Australia with a side of chips and salad, although there is some dispute as to whether the chips should be served under or next to the chicken. The dish’s informal name varies across regions, with ‘parmy’, ‘parmi’ and ‘parma’ the most popular variations. Whatever you choose to call the Tingalapa Hotel’s 1kg mammoth dish, it definitely isn’t for the faint-hearted. Whether you tackle this one alone or wish to share your meal with a friend, the Tingalpa Hotel is the perfect place to sit back and relax. The hotel has many facilities including a modern gaming lounge, a children’s play area and a large onsite car park.

The 1kg parmy is available for lunch and dinner daily for only $31.80.